Holden & I: announcing the three-part series! 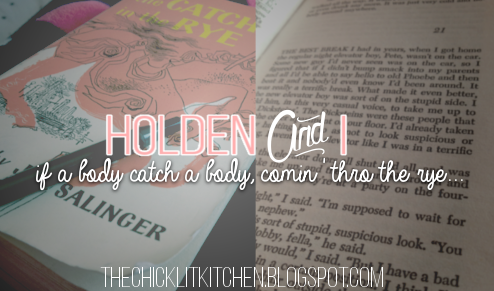 When my English teacher announced that we were about to begin reading the Catcher in the Rye, an overwhelming sense of dread washed over me from head-to-toe. Unlike the majority of my peers, I had already read Catcher in the Rye the summer before my sophomore year of high school, and the truth was, I hated that book: a combination of circumstances (I fervently believe that there's a wrong time for everything) and the common complaint that "nothing happens." For a brief while, I even hated myself for hating the book. At the time (and even still), popular culture practically worshiped the Catcher in the Rye and all that Holden and his red hunting hat stood for. The effects of groupthink had me convinced I was a Bad Literary. After all, if I didn't like "the Great American novel", how was I ever supposed to become a high-brow lady of taste?

Now, of course, the answer seems simple: I, Haley, was a phony. I was reading the Catcher in the Rye for all the wrong reasons. The image of me reading Catcher on the beach in Cape Cod still strikes me as one of discord - it is not a book to be read on vacation, when the mind is idle and the sun is hot. But I didn't know that then, of course, when as an immature fifteen-year-old, my supposedly-sophisticated taste in "the classics" took over my good sense. (I now realize that summer is a time best reserved for the Meg Cabots and Stephanie Meyers of the world, not the J.D. Salingers.)

Admittedly, there is a Holden-esque hypocrisy taking place before your very eyes. I say I hated Catcher in the Rye, yet on my about page, I list it as one of my favorite books. So, you're probably wondering, what the Bronte happened?!? (Side note: thanks to John Green for my new favorite pseudo-swear!)

And I'll tell you: it all comes down to two simple truths. One, I grew up.  And, two, this time, I thought about it.

To be frank, I did not go into reading Catcher in the Rye with particularly high expectations. However, I was given the tiniest glimmer of hope - a preternatural sign, perhaps, that this time would not be like the last - when I sat down in class and my English teacher announced, "We're going to do something forbidden. We're going to write in our books."

Naturally, those words aroused the kind of excitement in me that can only be described in the following terms: imagine that you are quite young, maybe nine or ten years of age, and it's April Fools' Day, and you're plotting with your little brother to squirt chocolate sauce all over the windows of your daddy's car. You're devilishly wiggling your fingers, practicing your most innocent smile, and basking in the sheer brilliance of your utterly conniving scheme - and the best part is, the babysitter is completely in on it.

I'm not speaking from experience, of course - that would be absurd....

...but if it were to have happened to me, then that's the feeling I would liken this to. :)

And, oh, does it feel good to be bad! (Holden would probably agree - as you probably know, straying from the norm is sort of his specialty.) That day in class set the tone for what ultimately became one of the most joyful and profound reading experiences of my life. I'm not kidding.

Like so many great novels (and very few popular ones), the Catcher in the Rye is a book about language, not a book about Stuff. It's a book that has a lot to offer - if one only knows where to look.

Most of you will probably think I'm crazy for this, but to be honest, I was glad that I read Catcher in school, rather than on my own. I never would have come to fully appreciate its sensitivity and craftsmanship without a hand (or twenty) to hold along the way. As they say, "it takes a village" - and Catcher in the Rye is the kind of book that takes a classroom to comprehend. I just can't believe that Salinger planted all of these symbols and cues and intentionally, as I simply cannot fathom all of these abstract ideas neatly compressed inside one man's brain. It's a wonder Salinger didn't end up in a mental institution himself.

Holden may be an exaggeration of a teenager, constantly whining and complaining, his voice dripping with sarcasm all day every day. He may be literally driven mad by the injustice and discomfort of the adult world, while most of us are only figuratively so - but despite all of this, he is still a tangible, relate-able character for many teens, myself included. Eerily, his voice oftentimes merged with my own as I was reading; at times, he so perfectly captured my thoughts that I could hardly distinguish between what was him and what was me.

Holden, caught in the narrow gap between childhood and adulthood, has a hard time accepting the fact that no matter what he does, he will inevitably have to grow up and go on. As a teenage girl who has experienced the awkwardness of graduating from the kids' table to the adults' table at Thanksgiving, yet never has anything to contribute to the endless talk of money and marriage, I can testify just as well as Holden: growing up is painful. It is often easier to turn a blind eye to it, and ship ourselves off to Neverland with Peter, than it is to acknowledge the cruelty of the great big grown-up world that awaits us.

But, as Mr. Antolini reminds Holden, “Many, many men have been just as troubled morally and spiritually as you are right now...you’ll learn from them - if you want to. Just as someday, if you have something to offer, someone will learn something from you.” It seems to me that Salinger wants us to know that this is the point of it all - that we don’t do it for the money or for the cars, but for the legacy we leave behind. As a teenager facing the overwhelmingly scary prospect of growing up, it’s a comforting thought, one I think all teenagers would be heartened to read. That's why teenagers need Holden: to remind them that they aren’t alone.

Like Holden, I think we all have those moments when we wonder, what's the point of it all - and, especially, what are we working for? Do we wake up at 6:00 AM every morning just so we can become wealthy, well-liked members of society - or can we aspire to more than just buying Cadillacs with big, fat paychecks and sleeping with our spouses against the background of some phony movie? Holden recognizes that the obsession with obtaining the “American Dream” - which requires money, prestige, and conformation to societal norms - starts as early as high school. The pressure to conform can be devastatingly oppressive.

The theme of acceptance is constantly echoed throughout American Literature, from the Great Gatsby to Death of a Salesman to Catcher, as well as in the halls of each and every secondary school in the country - proving just how dog-eat-dog our society truly is. It is a timeless theme that needs to be expressed in writing, or else we may never truly understand the most important question of all: why? Why are we here? Surely we measly teenagers haven't got the foggiest. Dare I say it, most adults probably haven’t even figured out what their “purpose” in life is. Stories such as the Catcher in the Rye are important because they remind us that we all struggle with such existentialist questions, and help us to make sense of the ominous adult world that looms before us.

Through Catcher in the Rye, I was able to rediscover my second true love: the Outcast. You know the guy: the one who sits alone at lunch, goes on long, meditative walks by himself, or swings the peak of his red hunting hat to face the back, the way he likes it. Humans, as natural pack rats, tend to instinctively pity and empathize with these types of characters. Honestly, I'm no exception - I know I'm not - and I feel my heartstrings wrenched just as much by Holden as by the likes of Ponyboy Curtis, Neville Longbottom, or Frankenstein's monster.

The other aspect of Catcher in the Rye that appealed to me was, of course, the social commentary. I just can't resist a nice, juicy controversy, as anyone who knows me will attest - I'd like to think that I'm the girl who opens her mouth and lights a fire in the room (or, sometimes, awkwardly sets the crickets a-chirping, such as when I suggested my friend take birth control pills in front of her conservative mother...oops). Catcher in the Rye is full of witty observances about American society - yet behind each of Holden's famously snarky complaints lies a deeper truth, each of which must be individually explored in order to fully grasp the complexity of the work.

I had fully intended on compressing my analysis of Holden into a single, long master post - a scholarly and educated thesis about Holden's unhealthy sexuality, his peculiar brand of feminism, and what it all says about Salinger and American society in general. I thought it would be a kind of magnum opus that I could turn into colleges (and perhaps to my English teacher - is that extra credit I smell? Just kidding, Ms. G!) as snooty, pretentious proof that I, Haley, am a well-learned and precocious young academic. But, alas, I just couldn't do it - not even for BU. It would be capital-I Impossible. It really would.

I assume the Universe is trying to tell me to be less of a phony, to care less what people think and embrace my inner Holden Caulfield. So, I'm going to take the Universe's advice and put on my red hunting hat, cuddle up with some herbal tea, and enjoy my time spent with Holden and Salinger...and, lucky for you guys, "taking my time" means not one, not two, but three posts entirely dedicated to Holden, Salinger, and the infamous Catcher in the Rye! In my brand-new, three-part series "Holden & I," I'll explore the social context and deeper implications of Holden's relationships with his sexuality, women, and, of course, his Almighty Creator, the talented yet troubled J.D. Salinger. Below, I'll be linking you with each of the posts as they go live - so bookmark this page and stay tuned for our next three encounters with young Master Caulfield!

As you can see, Holden and my man J.D. are going to be front and center here at the Chick Lit Kitchen for the next few weeks, so if you're not a fan of Catcher in the Rye, I highly recommend that you follow the subsequent advice: pick up a copy from your local used bookstore, grab your best ballpoint pen, and do as I did - Grow Up and Think! They say you have to try something seven times before you truly know if you like it. Whether this is your first, third, or seventh time reading Catcher, I truly believe that everybody has something to be gleaned from it.

If there's anything I've learned from writing this post, it's that you should never tell anybody anything. If you do, you start missing everybody.

Email ThisBlogThis!Share to TwitterShare to FacebookShare to Pinterest
Labels: read